Today's Congress is a different group from the congenial group that first met in 1789: members oversee some 200 committees and subcommittees charged with disposing of the 9,000 bills introduced each session. Have too many moving parts put the national legislature beyond the control of even its most ardent supporters?

In its purest form, "policy" defines a course of action that outlines how the government is run, preferably in a way that promotes the nation's safety and general welfare. Somebody (or bodies) has to take the wheel, articulate a shared vision, and then build a consensus to implement it.

Delegates to the 1787 Constitutional Convention separated, enumerated, and otherwise distributed political power among multiple, competing groups, but they designed the national legislature as the engine for the new government.

The engine that was 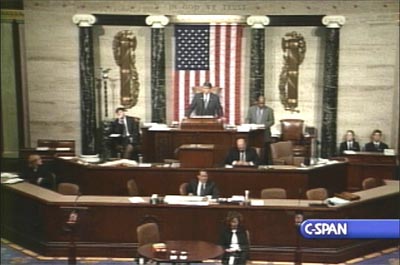 By and large, the First Congress that met in New York in 1789—they didn't reach Washington until 1800—was a congenial lot. Many had worked together before: 31 of the 65 Representatives and 22 of the 29 Senators had all served in the Continental Congress. Though they differed on matters ranging from representation in the national government to slavery, substantive issues were discussed in a unified and open forum. According to the Senate Historical Office, "there was no system of standing committees. The President of the Senate would appoint a number of members to form a committee to consider a particular matter." This picture has changed dramatically over the past 200 years. That today's Congress can agree on any save the most minor matters is a tribute to the men and women who work on Capitol Hill. There are 435 Representatives and 100 Senators. The House has 24 Standing Committees and 88 Subcommittees. The Senate counts 20 Standing and Special committees, 4 Joint Committees, and 68 Subcommittees. According to the House Parliamentarian, roughly 6,000 bills were introduced in the House with another 3,000 in the Senate during the 107th Congress (2001-2002).

Our Washington representatives are, indeed, busy people—attending committee meetings, meeting with constituents, meeting with other government officials—just rarely meeting together. Except to listen to the State of the Union address and on other special occasions, the Senate and House chambers are lonely places. A Presiding officer gazing out at a handful of party leaders and speakers shuffling business on and off the floor is an all too familiar image to anyone stumbling across C-SPAN.

Beyond the grasp of its most ardent supporters?

While designed to facilitate governing "an extended republic," have all these moving parts put the legislature beyond the control of even its most dedicated members? Despite all the committees, bills, and helpers, few can remember the last sustained debate on any issue other than the furor over President Clinton's (non-PG rated) Oval Office activities.

The Federalist's vision of an older and wiser Senate checking "the impulse of sudden and violent passions" of "the more numerous branch" seems like a distant dream." And, while the Senate has historically functioned as "a millionaire's club," the numbers have recently gone through the roof: a Wall Street banker set the campus record in 2002 with a successful $65 million bid for one of New Jersey's seats.

"No one here really knows"

To be successful, policy should result from open and thoughtful discourse. The First Amendment says so, but doesn't mandate that it happen. While America can't turn back the clock 200 years, is the ideal of an engaged legislature, committed to discussing major issues and holding itself and other government branches accountable to the electorate hopelessly unrealistic? "No one here really knows," a response that PT initially received upon querying officials on the number of House subcommittees. 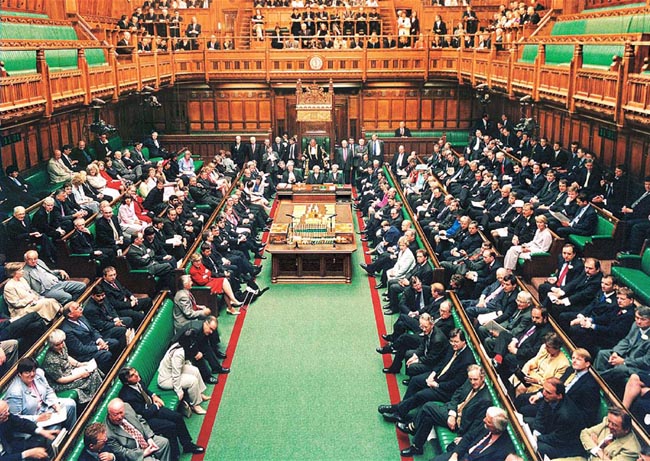 But, consider the House of Commons, which counts 659 MPs including the Speaker. Commons has 47 Select Committees, 2 subcommittees, and 4 other committees, about one-fourth the total of the House and Senate committees combined— with 20% (125) more MPs.

The British public can still thrill

True, Parliamentary committees play second fiddle to the Prime Minister and his Cabinet. Yet, several times a week, Commons engages in Questions, a 150-year old practice aimed at holding public officials accountable for their actions. The debate is lively, the answers political but on point. And however cynical observers view the proceedings, the British public can still thrill to the scene of their representatives debating issues of national importance in a public forum—government the way it could be.

3 HOURS IN THE LIFE OF THE HOUSE
During one typical afternoon, the House considered and acted on the following bills, motions and resolutions: Source: LEGISLATIVE DAY OF JUNE 14, 2004, 108TH CONGRESS - SECOND SESSION