"More Effective Ways to Get the Leadership We Want"

PT: In our earlier interview (See, PT, p 9), you raised several questions about the legislative redistricting initiative. Have your feelings changed?

PT: There seem to be two issues here: growing partisanship among elected officials and voter's frustration with a political system that appears unresponsive to their needs. Let's start with the former. If "protected incumbents" aren't the cause, what is?

Speier: I think it has everything to do with party dynamics. Today's politics makes it more difficult for moderate Republicans as well as Democratic Party conservatives.

So much has been taken from the Karl Rove book of politics. The other day, for example, we were commenting on the latitude that the Republicans have given Senator Maldonado (R-15) to vote with the Democrats. As a result, he has been able to attract more Latinos to the Republican Party.

PT: Let's move on to voter frustration-a sense that "the system" is broken and the Legislature isn't doing anything about it. 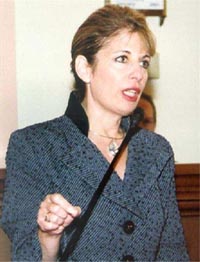 “Redistricting will not change
the face of the body politic.”

Speier: Voters want to see the Legislature and the Governor work together to solve problems. We need to deliver more timely, bipartisan decision making, such as we did on this year's budget.

PT: The Governor's response is to go directly to "the people" in this November's special election. You've suggested that incumbency itself is not the problem. And, that to the contrary, politics is like any other profession-where experience counts.

Speier: The electorate recoils from the notion of politics as a career. There's a fear that elected officials get too comfortable with the job and don't represent the people. I can show you members who have been around who have gotten better. I have had 17 years. But for these 17 years, I would not have the experience, been seasoned enough to take on larger issues such as the power and influence over management decisions and wildly expensive pay contracts negotiated by the State's prison guards.

In any job, you want people that are knowledgeable - that doesn't happen overnight. Shouldn't we try to do the same here? Today, 17 years is considered a long time. When I started, 31 years was a long time. I think back to my early years in the legislature. I have gown immeasurably over the years: voters are now recognizing this process.

PT: Again, the Governor takes the opposite tact that as a "political outsider," he's not tied to vested interests, that he brings a new perspective and will to fix the problem.

Speier: In this respect, I think the Governor's political inexperience is a definite minus. He's made a number of mistakes that he wouldn't have made had he had some political experience. He can't seem to shed the "Terminator" mantle.

PT: Let's spend a minute on "legislative gridlock." Critics have complained that the Legislature is distracted by minor bills at the expense of more meaningful and complex issues. 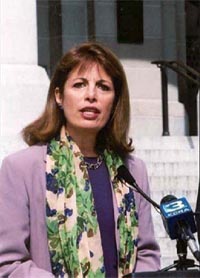 “In any job, you want people
that are knowledgable.”

Speier: I totally agree. There's a public policy group headed by [former Governor] Pat Brown. Every year they do a document - 100+ pages. It truly helped me understand why we are going the wrong way. Because we have lost our sense of what's really important.

In my view, the most important issue is education, education, and education. We get so immersed in minutiae. Looking at core values, we should be concerned about how we are undermining higher education in this state. The rest of the country is picking off our brightest students educated at California's universities.

PT: What do you think, then is the answer to the current impasse-voter frustration, political partisanship, and legislative paralysis?

Speier: In a perfect world: open primaries, 12- year term limits, and the structure to truly educate the policy makers. We need a whole reconstruction on how we generate revenues -but no one wants to talk about Proposition 13.

An open primary is a much more effective to get the type of leadership that we want to solve problems-not to create them. Open primaries will attract people that are not tied to a specific litmus tests.

We also need to figure out a way to stop legislating by initiative. A lot of pet projects will be done by these initiatives, which is not how we should be doing it.

PT: Senator, thank you for your time.

When this story was written in 2004, Jackie Speier served as Assistant President Pro-Tem of the California Senate and represented the 8th Senate District - San Francisco/San Mateo. Last week, in the election of April 8, 2008, Ms. Speier was elected to represent California's 12th Congressional District to fill the unexpired term of Tom Lantos. She earned a B.A. from the University of California at Davis and graduated from the University of California Hastings College of Law.